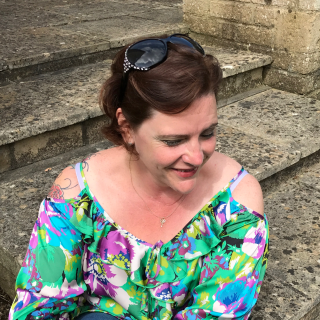 I came across a blog today that immediately transported me back to my childhood.  The blog resonated with me as so many things the blogger mentioned were things that I have first hand experience of.  However the thing that really shook me was the awful truth that, decades on, some are still dealing with these issues.   http://kathleenkerridge.com/2015/01/28/the-upsetting-reality-of-modern-day-poverty/  most definitely worth a read.

Now I wouldn’t say my childhood was tortured or sad, because it wasn’t, at the time I knew we weren’t rich, or even middle classed, and I was aware we (I) had less than my peers but I didn’t  feel that hard done by (well most of the time).  I am the youngest of 3 with an older brother and an older sister.  My mum was ill and my dad lost his job when I was 7 (never to work again) however, my parents did their best, they went without to provide for me and my siblings. I received a gift on my birthday and at christmas; I always had new shoes but clothing was either hand me downs from my sister and friends or from jumble sales, it wasn’t often that something brand new was received, however when it was it was cherished and looked after. My mum would knit, jumpers, socks, gloves – not always with success.  Knitwear that had been outgrown would be unpicked and the wool re-wound to knit into something else.  My mum hardly ever used a pattern, unless she was learning something new; she would sit in front of the fire watching the television, her fingers working automatically without even looking at what she was doing – but lots of people knitted back then.  I remember once a year going on the bus to Witney with my mum to the Salvation Army or Women’s Institute clothing bank – I was allowed to pick out a winter coat, dress,  school skirt etc and all for free.

Our garden was given over to growing vegetables by my dad ably assisted by myself – although I didn’t enjoy picking the slugs off the cabbages – yuk! We had rabbit and pheasant because it was given away but hardly ever a chicken let alone pork, beef or lamb.  I remember watching my dad skinning rabbits in the kitchen, it seemed like the most natural thing to me.  We got a turkey at Christmas if my mum or dad went to the local turkey farmer and did a few weeks of turkey plucking (a turkey received in part payment!).  Fizzy drinks and squash were non-existent, not even the Corona brand that was delivered to the door with the 5p refund on the bottle.  Cow’s milk was not a regular visitor to the house replaced instead by evaporated milk in a tin and sometimes condensed milk, again in a tin but pre-sweetened so no need for sugar and both of which you could keep without a fridge.  If you wanted a drink you had tap water or a cup of tea, and sometimes a treat of ‘Camp Coffee’!

Sweets and biscuits were a rarity, cakes were available only if my dad made a cake and then usually this was a sponge with dried fruit in … lovely though.  Bread was purchased from the local bakers and doorstep cheese sandwiches with home-made pickled onions were eaten (when funds permitted).  I know my parents would often go without dinner to ensure I ate as there simply wasn’t enough for everyone all the time.  Food was not wasted, leftovers were used up to make stews, bubble and squeak or if really lucky bread and butter pudding.  I was lucky enough to have a 1/4 bottle of milk at school each day and a free school lunch.  This diet of very low sugar, limited meat and fat and plenty of vegetables was excellent and one which so many people now try desperately hard to stick to!

We didn’t have a fridge until I was about 11 (given to us), instead we had a larder, situated, as all good larders should be in the north-west corner of the house (geographically the coldest as in shadow for most of the day).  Washing was done by hand or lugged to the village laundrette until we were given a very old (single tub) washing machine with an old-fashioned mangle on the top.  This was replaced a few years later by a twin tub (with spin dryer) again given when someone else got a nice new automatic one.  I would spend Saturdays in the kitchen doing the washing in one machine or the other from the age of 11 (mum wasn’t able); it wasn’t easy but was easier than doing it by hand!

We never had a car; my dad had a rusty old bike which he would ride everywhere.  I didn’t have bike so I walked everywhere or sat side saddle on the cross-bar of his bike (when I was small enough).  I remember walking miles on summer evenings, holding hands with my dad on one side and my brother on the other.  My dad would tell me the names of the trees, plants and wildlife and would let me pick a bunch of wild flowers, usually Moon Daisies, to take to school to give to my teacher the following day.  I remember using a pair of old tights to catch bullheads (tadpole type things) in the brook near the River Thames and placing them in a jam jar full of water.  The competition was to catch the most – when done they were all put back, hopefully unharmed and then we would walk the 2 miles home.

All the groceries were bought from the local shops, and carried back in reusable bags or mum’s shopping trolley; even the coal for the fire came from the shop up the road, pushed down to the house on a sack truck and then pushed (empty) back to the shop.  I would walk for miles with my dad and a set of pram wheels with a make shift box sat on top to collect fallen wood and would then help my dad to chop or saw it up in the garden… plenty of exercise.  No need for a gym membership – don’t think they even existed back then!

There was no central heating just an open fire in the living room (lounges were for posh people).  The windows were metal framed and single glazed and in the winter would freeze shut with an internal layer of an inch of solid ice.  Each morning I would wake up draw the curtain and look at the patterns left by Jack Frost on the windows – always so beautiful and something I’ve not seen for years.  The walls were damp, wall paper and paint peeled off easily and mould was prevalent, especially in the winter.  I was allowed a bath and a hair wash once a week on a Sunday night but my mum insisted on a ‘strip wash’ every day – we always had soap; being dirty was not an option! Some of this may sound Dickensian but it was just how it was.

We had one black and white TV in the living room (lounges were for rich people) rented from Rumbelows (they save you money and serve you right – who remembers them?) which was turned on at 6pm on weekday for the News, Crossroads etc and off again at 9pm, you watched what my dad was watching or watched nothing at all. However, I was allowed to watch some TV at the weekends and remember watching ‘ the wonderful world of Disney’ film on sunday afternoons but wasn’t really allowed to watch Tiswas or Noel Edmunds Multicoloured Swap Shop on a saturday morning as it was, in my dads words ‘rubbish’ and probably not so good in black and white!

I didn’t have a huge amount of toys, no Barbies or Cindys’ demanding miniature clothing, I had a couple of board games and a pack of cards.  So to while away the time I developed a love of reading.  Avidly consuming any book could get my hands on, from school, from the local library, from jumble sales.  I’d read the whole works of Sir Arthur Conan-Doyle, the abridged works of William Shakespeare, the majority of Charles Dickens, numerous Miss Marple whodunits and countless novels, biographies and autobiographies by the age of 12.  I developed a very vivid imagination and am pleased to say that my joy of reading and of the written word has never diminished.

As a parent, I look back now at the sacrifices made by my parents and wish I could tell them how I know they did their best and how much I appreciate everything they did for me but sadly they are no longer here.   My boys are fortunate, both myself and my husband are employed and we have a nice home with central heating, double glazing and food in the cupboards.  I still abhor food waste and try hard not to create any, however this can be hard at times as I can still cook for 6 even though there are only ever 3 or 4 of us in the house for meals now; leftovers are used up and food is rarely thrown away.

My childhood wasn’t a fairytale but it was better than some others may have had.  It taught me to be resilient, make do with what I had, to make my own fun.  I developed a love of reading and enjoyed education; working hard to strive to have better and ultimately to provide better for my children, to move forward.  Strangely this is, in all probability exactly the same things my parents, and hinders of other parents strive for.   The reward comes, I believe, when you see your children flourish and become happy, sociable and rounded adults making you proud and proving that sacrifices made were worth it.  I hope I proved to my parents that their sacrifices were worth it.

I Have a Couple Things to Get Off my Chest

Daily thoughts on life, people and the world.

How do you eat an elephant?

My journey with Breast Cancer

A celebration of linguistic creativity

delivered directly to my computer monitor on an all too regular basis...

by an artsy whovian, for whovians!

Debut YA and Middle-Grade Authors of Historical Tales

Thumbsucking at the Intersection of Mental Health, Politics, and Pop Culture

A Damsel in This Dress

My life in stitches - adventures in the world of costuming...

For more about me, visit www.SaraRosso.com

come along and sew with me!

Cooking Up The Pantry

WordPress.com is the best place for your personal blog or business site.